IMPORTANT: This event spans two separate days (Sep 22 and Sep 29). The speakers listed below will be presenting on Sep 29. 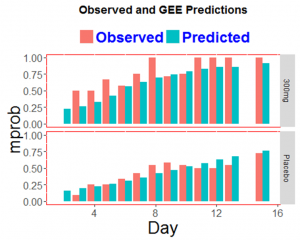 Subject weight, drug and mercury concentration, treatment (dose) and day on study almost always had significant effects on improving GEE and GLMM models, though the use of some covariates, especially mercury concentrations, introduced instabilities in modeling. Depending on the metric (again, “always lack energy”), the odds of a person achieving a “good” physical or mental effect with the drug could be as much as 4 times the odds of the same person with placebo.
+ Google Calendar+ iCal Export